We are spicing things up around here and our off-site catering division is ready to bring the heat when it comes to Austin events. We are so excited to share all that we have been cooking up, starting with the official announcement of our new Executive Chef, Jesse Genovese.

Chef Jesse comes to us from the bright lights of Los Angeles where he was in charge of providing full-service catering for production studios like Netflix, Fox, and Amazon, as well as private events for some of Hollywood’s biggest names. Catering experiences that prioritize elegance and glamour are Chef Jesse’s specialty.

“Austin is becoming a destination city for the entertainment industry with internationally-famous events such as SXSW, the ACL Festival and the big events at the Circuit of the Americas,” CEO Kim Hanks says. “Chef Jesse has delighted Hollywood for the past decade and now he is going to bring that same glitz to special events in Austin.”

“I love the approach Austin takes with its food,” Chef Jesse says. “I think that what Austin does so well is that middle bracket of dining. Austin is a social city, and it’s no surprise that the restaurants that emphasize the social setting as part of their dining experience are the ones that have gained traction in this city.”

While Austin restaurant’s may have experienced an evolution over the past 10 years, the catering industry has not evolved at the same pace. The traditional Texas barbeque spread or buffet-style service that was popular 20 years ago is still popular today.

Chef Jesse is hoping to help elevate Austin’s catered events by bringing in innovative menus, elevated delivery of service and an exceptional dining experience. He wants a Whim catered event to be as personable and intimate as dining at your favorite neighborhood restaurant – regardless of event size.

“I think it comes down to having high standards and wanting to be as close to perfect as possible” Chef Jesse says. “We have to start with impossibly high expectations and then adjust based on the needs of the client. Elegance is key for service and the quality of food. I want Whim Catering to be synonymous with elegance, and that starts with our service delivery.”

The culinary approach Chef Jesse takes in the kitchen is a reflection of the international cities where he has cooked. He grew up in Hawaii, before moving to Mallorca, Spain, to stage at the Read’s Hotel and Restaurant, which had a Michelin-rated kitchen led by Executive Chef Marc Fosh. Having found his passion for cooking in Spain, Chef Jesse moved to London and enrolled at Le Cordon Bleu Culinary Institute, where he received formal training in classic French cooking techniques.

Chef Jesse returned to the United States in 2004, moving to New York City to work as a Sous Chef at Suba, a restaurant owned and managed by celebrity chef Chris Santos. Eventually, Chef Jesse moved to Los Angeles, where he served as Chef de Cuisine at the Avalon Hotel in Beverly Hills. He became one of Los Angeles’ leading caterers in 2007 when he became the Executive Chef of Ramsey’s at the Club, a full-service special event venue in Burbank, California.

This experience showcased Chef Jesse’s ability to deliver customized menus and dining experiences for large-scale events based on the vision of his clients. His most recent role at Bruce’s Catering in Los Angeles gave him the responsibility of balancing the need for large-scale food service with demands of some of Hollywood’s most high-profile personalities.

“I saw in LA how important presentation is, whether it’s with service of the plated meal or a new cutting-edge experience entirely,” Chef Jesse says. “I think there are times when typical Austin catering leans towards a more casual or rustic feel. Some of the higher end events that come to the city are looking for a more elevated experience. I want to be able to build a catering team that can deliver on both types of experiences better than anyone else.” 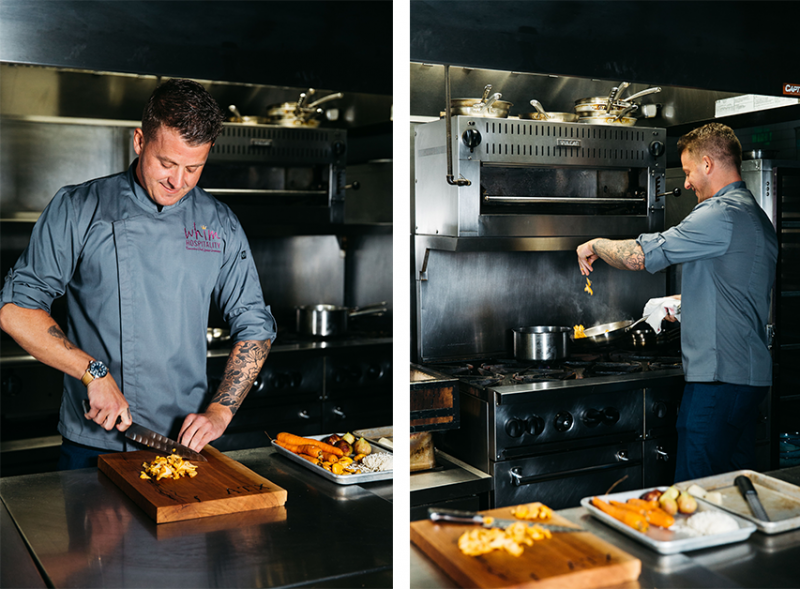 We are so thrilled to welcome Chef Jesse to the Whim Family and can’t wait for you all to get a taste of how he will aid in the continued growth of Whim Hospitality Catering.